Yahoo Canada is committed to finding you the best products at the best prices. We may receive a share from purchases made via links on this page. Pricing and availability are subject to change.
Rachel Roszmann
October 2, 2022, 1:37 p.m.·3 min read 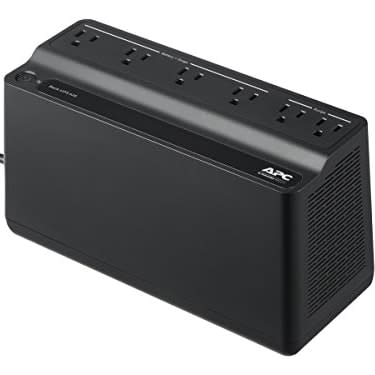 $45$76Save $31
Keep your devices safe with this handy battery backup and surge protector.
$45 at Amazon

While the surge-protector function of this gadget protects your electronics from being destroyed, it goes a step further to give you peace of mind during power outages. If you live in an area where there are a lot of lightning storms, you know how annoying it is when the power goes out. Well, this surge protector makes that a lot less annoying because it doubles as an uninterrupted power supply (UPS) — that means your devices will keep running while the power is out. It's made life a lot easier for over 6,000 five-star fans.

"I have three... great for keeping WiFi on, even during power outages," reported one rave reviewer. "I use them to protect our work and computers so I can gracefully save and shutdown our computers. And I use them to power our security systems and to maintain our internet. For example, one time, while working from home, I lost power for six hours and was still able to work on my laptop and have the internet going AND keep our properties on a live security system."

"I purchased this item to supplement my generator," shared a satisfied customer. "When my power goes out, which is all too often, the connection to my generator is almost immediate but it's enough time for my computer to crash and have to be restarted. Any work that I've done that's not saved is lost. Since I work from home that can be almost catastrophic. I purchased this in hopes that when the power goes out, the battery back-up will maintain power to my computer. Sounds good on paper, but my power has not gone out since my purchase, so stay tuned."

But customers like it for more than just computers.

"I bought this for an unusual need," shared a five-star fan. "My 78-year-old mother has an electric recliner, and I did not want to have to worry about her getting stuck in the chair if the power went out and hurting herself trying to climb out. Works great for that. I have put the chair up and down 10 times on battery power and still had power left for more. I also have a 5w LED lamp and her phone charger plugged into it so she will have some light and a way to charge her phone if the power goes out. No idea how long runtime is, but works great so far for the short outages she has had (not a common occurrence around here, but often enough to need this)."

Want to be prepared for the next storm? Point, click and add to cart.

$45$76Save $31
Keep your devices safe with this handy battery backup and surge protector.
$45 at Amazon

The reviews quoted above reflect the most recent versions at the time of publication.